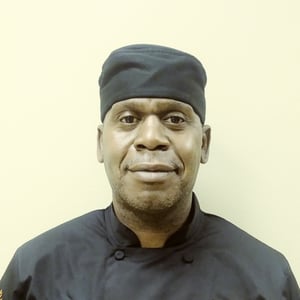 When Derek Gray joined HHS in July 2020, he had no idea how quickly things would start to change in his career. Just three days after starting as a cook at a hospital in Houston, Texas, Derek was asked to travel to Austin, Texas to assist at another facility. During his time there, he was able to stay at the HHS Home Office and learn about HHS’ culture and approach to culinary.

After a month in Austin, he went back to Houston to begin working at a senior living community, where he worked hard to improve the culinary operations. He helped the community better utilize the dry storage, freezer, and cooler, while also developing and training the kitchen staff.

Just a couple of months later in September, Derek was notified that he was being promoted to culinary director. He was shocked and happy, and he felt like he’d finally arrived at where he’d always wanted to be in his culinary career.

“My career has been one of many stories that show that hard work and determination can get you where you need to be. My experience with HHS has been more than pleasant and I’ve thoroughly enjoyed learning the HHS way.”

Interested in a career at HHS? We'd love to get to know you.