Never Dim Your Glow: Ashley's Search for Family and Self-Acceptance

When she was 11 years old, Ashley Vandiver woke up from a months-long coma to learn that her mother had succumbed to her injuries from the car accident they’d been in together. Three months later, Ashley’s father died by suicide. Feeling lost and alone, Ashley stopped speaking for almost two years. “I was kind of thrown into limbo. None of my family wanted me because I was deemed as damaged goods,” Ashley shared. “When I got thrown into the [foster care] system, I became hopeless in a very ugly way that you don’t ever want to see anyone go through.”

It was during that time of feeling lost and alone that Ashley began examining who she was and searching for answers. “I started to question why I was different. I didn’t like the same things that other girls liked at all,” she said. What she didn’t expect to find in this journey for answers was family.

Ashley began attending LGBTQIA+ club meetings at her middle school. She found a safe place to process all the questions she had. She asked the teacher who sponsored the club, “I’m really confused, is there something wrong with me?”

Ashley’s family was very traditional and she had only known rejection at that point. “[When] nobody was there to take me and I was put into the [foster care] system, everything I’d been taught about family was [wrong]. The [LGBTQIA+] group started to teach me what family should be like. It was as simple as acknowledging me and not making me feel like I was weird. It was talking to me, asking me how I feel, and actually taking two minutes of their day to really connect with me. I started to find acceptance, “ Ashley reflected. She found her first girlfriend at 14 and she felt whole. “I didn’t even care that people made fun of me, I felt normal for once. I was like, this is who I am,” she said. 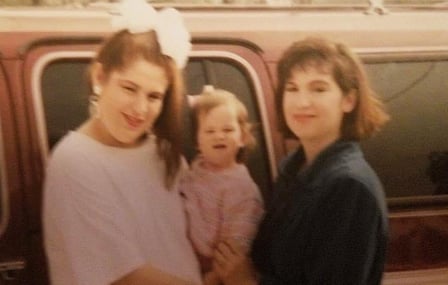 After a lengthy legal battle, Ashley’s older sister gained custody of her. “When my sister finally came to pick me up, the first thing I said was ‘I need to talk to you about something and I want to talk to you about it right now before we leave because if you hate me like everybody else does in the family, you’re gonna have to leave me here,’” described Ashley. Much to Ashley’s relief, her sister accepted her without condition, saying, “I love you and I’m always going to love you.” Ashley finally found stability and acceptance, not only in her LGBTQIA+ community but within her family as well.

Ashley remained very involved with the LGBTQIA+ community. She began taking part in activism during college and attended marches and rallies. She wrote to congress and fought for equal marriage rights. She did this all alongside her chosen family.

Ashley began her career in hospitality when she was 20 years old. Early in her career, it was hard to completely be herself. She was told to hide her identity and play the part or she would not earn tips or advance her career. After some time, she chose to shed her mask and stopped hiding who she was. But as a result, Ashley endured hate and discrimination. Though it was difficult, once Ashley began being open about her identity at work, she knew she couldn’t go back.

She amassed years of experience in hospitality but endured more trials along the way, including a battle with lupus and being laid off and out of work during the pandemic. In January 2022, Ashley began working for HHS as a housekeeping assistant director at a resort. Ashley says, “Being here at HHS, I am seen just like everybody else. It’s a breath of fresh air. You don’t feel judged. You can come here, do your job, and no one is going to judge for who you are outside of work. This has to be one of the best opportunities I’ve ever had in my life so far. Actually seeing people that believe in what I can do; it shows me the potential I am harboring.”

Reflecting upon the impact of the LGBTQIA+ community on her life, Ashley said, “Outside of those [LGBTQIA+ friendly] places, you’re faced with constant judgments from society just for being different. [People] label things ‘different’ because they don’t understand. Take the two minutes and try to understand. That’s all it takes.”

Ashley struggled to find a home after the traumatic loss of her parents, but the first home she found was also the place where she found herself. She says, “My life wasn't always easy, but what I have learned is you have to choose love when you exist in a world that craves destruction. Never dim your glow to fit comfortably in a place that wasn't made for your light.”

What does Pride Month mean to you?

“Pride Month means to belong, and by that, I mean belonging to the family that is LBGTQIA+. It is a time to celebrate [being] unapologetically yourself, without the restraints and conforms of biased groups. It is the perfect time to celebrate how far you have come, and it is also the evaluation of how far we have yet to go. It's being a part of something bigger.”

What do you think those outside the LGBTQIA+ community can do to be better allies?

“Listen. Hear out the voices of LBGTQIA+ [people], whether it's your neighbor, your brother, your son, your dad, your uncle, your cousin, your aunt, your sister, your mother, your grandma, or your great-grandpa twice removed. [Listen to] the senate leader that up until now wouldn’t have been acknowledged because of who they choose to be or love. It's a voice that wants to be heard, even when we believe no one is listening. [Listen to] the people fighting to be equal and belong, just like every other human being in the world. Just simply listen and base your actions [on] that.”

What do you wish others knew about being LGBTQIA+?

“It’s a group of individuals that are simply human. Imperfect and flawed, but full of love, just like the person sitting next to you.”

Finding Opportunity and Passion at HHS

Rodney Laporte started working at HHS in July 2018 as a trash tech. He was initially... Read More