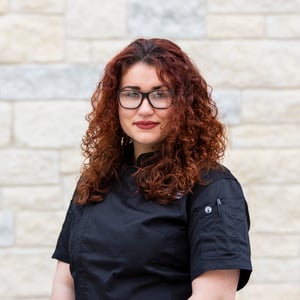 Erica originally began working with HHS in March 2013 as a housekeeper at a hospital in Corpus Christi, Texas, where she cleaned the OR and patient rooms on the labor and delivery floor. After about a three year leave, she returned to HHS with the goal of becoming an assistant director and eventually director. Her first position upon her return was as a dietary aide in a rehab hospital in Lakeway, Texas, where she interacted with patients and took their orders for lunch and dinner.

After 11 months there, she had the opportunity to transfer to KO's Cafe at the HHS Home Office in Dripping Springs where she assisted the chefs in the kitchen and around the cafe. After a few months in that role, a new opportunity emerged, and Erica moved to Colorado to become the HR coordinator at a medical center in the Denver area. In a new state with a new team, Erica is finding successes and challenges as she progresses in her role.

"My experience with HHS has been nothing but positive. I’ve had great leadership and great opportunities at every location I've been at. My dad and my brother both work with HHS as well, and we've all been blessed with all of the opportunities that have come to us."

Rose worked in the food and nutrition department of a hospital in Minneapolis, Minnesota... Read More