Paul Larocco’s journey to becoming a housekeeper at HHS is as unique as he is. Paul has the drive to make a difference and a spark for life that cannot be taught. His director, Robert Burkhart, appreciates that you can “teach anyone to clean” but says that hiring based on personality is ultimately what makes his team so successful.

While cleaning rooms, Paul has a natural ability to bond with patients. He brings them joy through humor, gives them hope, and reminds them of their worth. In December 2021, he received an Employee of the Year award as part of his hospital’s Service Standard Awards. He received 25 notes written by employees, patients, and their families, nominating him for this award. “That amount of notes is unheard of,” stated Robert. 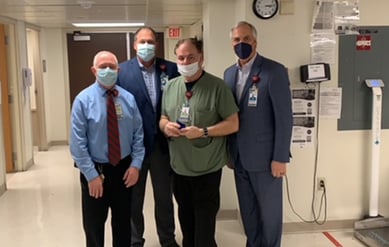 After Nearly Losing His Life, Paul Lives to Make a Difference

Paul’s depth of passion for making an impact in patients’ lives stems from his own near-death experience as well as his mother’s long medical journey. Paul spent 24 years in the insurance industry. Shortly after retiring in 2018, he got a severe infection in his left ankle that caused him to pass out while driving 55 mph down the highway and was hit by a semi-truck. When he came to, his car was still out of control and he assumed it would flip over, given how it was moving. “I let go of the wheel and left it in God’s Hands,” he said. It was a miracle that instead of flipping, his car gently reversed into a ditch.

He was rushed to the hospital where they found osteomyelitis, a bone infection, in his left ankle, which had caused him to pass out. Five days later, the doctors informed him that they needed to amputate his left leg below the knee. While in the operating room, he was praying with a nurse, when another nurse walked in and introduced herself as Sally. Sally was also the name of his beloved, Italian grandmother who had been a eucharistic minister before she passed. This put Paul’s mind at ease as he faced losing his leg. “It was my grandmother announcing that it was going to be ok.,” he said of that encounter.

After all this, the question remained for Paul, why was he kept alive? In October 2019 he found out. His mom had an aortic aneurysm surgery followed by six months and eight days in the hospital. Paul says of that experience: “I promised myself, I made a pact with God… I’m going to fight for my mom to come home alive but I promise you this, if the opportunity comes about, I’m going to give back, I’m going to give back tenfold.” And that is exactly what he did.

Paul’s mom recovered, and while she walks with a walker today, she’s also back in the kitchen cooking all of Paul’s favorites for him. Following his mother’s recovery, Paul was presented with the opportunity to become a housekeeper with HHS. “One day… either ourselves or someone in our family will take a turn in that bed. When my mom was in the hospital, I saw a lot of people who didn't have visitors. I wanted to give back.”

Many of the patients that Paul comes in contact with are fellow amputees grappling with their newfound reality. He pulls up his pant leg, revealing that he has walked the same road. Although, knowing Paul, he likely jokes that he has ‘hopped’ the same road as them to garner a smile and give them a moment of joy and distraction. What he offers to these patients is a chance to share their stories and hear his. He tells them, “You may or may not go through the same things [as me] but I’m happy to share with you.” He offers to show them pictures, he makes jokes, and even has challenged a patient to walker races in physical therapy!

Paul does all this and more. With permission from nurses, he helps feed declining patients, he drops what he’s doing to lend an extra hand in transporting a patient, and he leads by example with his positive outlook and contagious zeal for life. “I had a choice, and my choice was to live. It’s a great world and sometimes you need a humbling experience in life to appreciate life.” The three words that Paul wishes for all of the patients he serves to walk away with are “my life matters.” It is clear that patients who come in contact with Paul often find healing in more ways than one.

The legacy of Paul’s grandmother and mother, and all the values they instilled within him, are weaved intricately throughout his story. Their words are always present in his mind. He credits them and God for his outlook on life. He also has a never-ending appreciation for medical workers because of the difference they made in his and his mom’s lives. He gave them the credit for winning the Employee of the Year award. He doesn’t do what he does for recognition, he does it to make a difference, and he is building his own legacy.

In the future, Paul hopes to become a supervisor and be able to lead a unit. He wants to be part of changing the culture of EVS and how housekeepers are viewed, and even how they view their own potential. Paul looks for other ways to give back to the community and shows interest in fostering or adopting a child one day as well.

Team Member Offers Patient the Shoes Off Her Feet

Team Member Uses CPR to Save a Life

In Savannah, Georgia, team member Joe Simmons was doing his rounds in his unit when a... Read More
1 min Team Member Stories Sep 11, 2019

In Blacksburg, Virginia, Housekeeper Shelby Myers was cleaning in the ER when she noticed... Read More