Family-Instilled Love of Food Leads to Success in Food Service

Tracy-Ann Mitchell grew up in Jamaica, as part of a family that loves food. “From growing it to eating it and everything in between, food has always been an integral part of my life.” Working in the foodservice industry was a natural progression for Tracy-Ann. 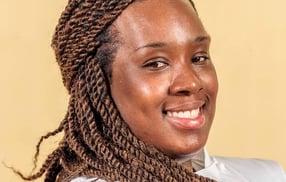 She immigrated to the United States in 2010 and later earned her Associate Degree in Culinary Arts in 2015 and her Bachelor Degree in Food Service Management in 2016.

Upon graduation, she jumped right into the field with a job at HHS as a sous chef in West Virginia. A little over a year later, she was promoted to chef and production manager at a small accou

nt in Louisiana. In 2020, Tracy-Ann was promoted once again to director at that same account and in December 2021, she was offered a promotion to another director position at a much larger account in Louisiana.

Tracy-Ann’s supervisor, Vice President of Culinary Stacey Allen, describes Tracy-Ann as someone committed to her customers, her team, and supportive of her peers as well. “She seeks out ways to be successful, is open to trying new things, and knows that failure means at least she tried,” says Stacey.

What advice would you give to your fellow team members?

“Make sure you enjoy your job. If the past two-plus years have taught us anything, it's that it is important to like what you do, so that the good times feel great and the bad times are bearable because we know they won't last forever.”

What do you enjoy most about working for HHS?

“The opportunity for growth and the openness of our senior leadership. In college, I did an internship with a company that's in the same service line as HHS. The experience has been a world of difference. I was excited to start working for HHS from the very first interview I did with Shawn Barrett, I could tell the difference then.”

Tracy-Ann is newly married to her best friend and they raise their daughter, Ada-Simone, and their two fur babies together in northern Louisiana.

Chef Praised for Quality of Food

A patient at a facility in Little Rock, Arkansas, was pleasantly surprised by the high... Read More
1 min Team Member Stories Mar 11, 2019