June 17, 2021, was and always will be an important date for culinary team member Maria Villasenor. It was the day that her lifelong dream came true — she became an official United States citizen. 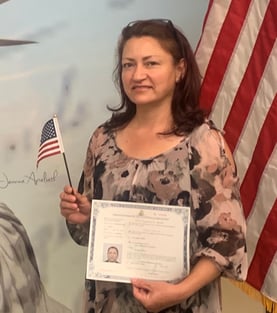 Maria was 13 years old when she first visited the United States, and it was on that trip that she knew that America was where she wanted to be. Life in her small town of Techaluta, located in Jalisco in central-western Mexico, didn’t offer many opportunities beyond high school education.

“After you finish school, it’s put in your mind that you need to be a housewife and have a bunch of kids. I knew I didn’t want that. I knew that when I had kids, I wanted them to have a better life and better education,” shares Maria. “Being from a small town, there weren’t many jobs, and there wasn’t enough money to go to school. I wanted to go to America and see if I could change my life.”

That’s why at 19, she packed up and headed to San Antonio, Texas, to live with one of her brothers. There, she found a job providing childcare for a lawyer and his wife. But because of her limited understanding of English, she struggled to have clear communication with the children. She knew that “if I don’t understand English, I’m going to have to go back.”

Maria worked hard to learn English. She’d sit and listen to people talk and try to catch on to words and phrases. When her boss offered her the opportunity to attend school to learn English, she jumped at the chance. Little by little, she started to understand the language. “I knew that if I could communicate, I could make a life in the United States,” states Maria.

And a life she did make! Maria married her then-husband, a U.S. citizen, and because of their marriage, she was allowed to obtain her green card and legally work in America.  After a five-year window, Maria was able to apply for citizenship but was too nervous to take the test. “At that time, I was focused on my kids.”

Maria worked hard to give her children the life she always wanted for them. Today, both her son and her daughter are attending university in the U.S. Her daughter received a scholarship to attend school in North Carolina and is currently working to obtain her degree in chemistry, and her son started college this August in California.

Having her children set up for success, Maria now had the time to revisit her dream of officially becoming a U.S. citizen. “Every 10 years you have to renew your green card. It’s a lot of pressure because the laws are constantly changing. My renewal was coming up, and I thought, ‘what am I waiting for?’”

Maria put in her application, and by January, she had received a letter to set up an appointment with an immigration officer. After learning more about the requirements, Maria hit the books learning all about American history, laws, and the U.S. Congress members. “I didn’t understand a lot of things until I started studying. I’m so glad and proud of myself that I did that.”

When the day arrived for Maria to take the exam, she was nervous but was quickly put at ease by the immigration officer, who made her feel comfortable. The test included a written portion, a reading exam, and then 10 oral exam questions. Maria passed with flying colors! And luck had it, that the very next day they were holding an official ceremony, and Maria was able to be sworn in as a U.S. citizen.

What This Achievement Means

“I feel so happy, more secure, and confident. I can’t really describe the feeling,” reflects Maria. “I was determined I was going to pass this test and get it done right, and I did! It is hard to describe how emotional it is when you hear the [immigration] officer say ‘congratulations, you passed!’”

Maria is now a proud owner of a social security card and has the right to vote. “To have my vote and voice count is huge!”

Maria has been with her facility in Arcadia, Florida, for 15 years and with HHS since 2013, serving as the cashier for the culinary department. Director of Culinary Brett Emanuel praises Maria, “Her hard work and dedication are unmatched, and she is best known as the face of the cafe. We love Maria!”

Join us in congratulating Maria as one of the newest citizens of the United States!

Every morning when Luis Gomez’s alarm sounds, he wakes up and celebrates that he has... Read More