Acquiring New Skills and Confidence Along the Way: An Assistant Director’s Path to Success

Elida Garcia makes an impression wherever she goes. She is cheerful as she talks about her experience and the path that led to her current position as a custodial services assistant director. She takes great pride in her work and her drive to serve and succeed is evident.

Elida’s current supervisor, Executive Director of IFM Devon Carroll, sung her praises: “I was tasked with a massive startup for our education division. Being the only HHS veteran [on the team], I knew that I needed some serious help; administrative support, training support, supervisory support — everything. Elida was the total package and then some! I hired her as our administrative assistant at the first chance I got and she not only worked her way through the whirlwind with me but has gone on to be promoted to operations manager and now, assistant director. This cornerstone account, the whole [education] division, would not be where it is without her.”

Elida had the perfect background of HHS experience to meet the education division’s needs in its early stages. She began her career at HHS as a part-time housekeeper at an account in Texas and was quickly moved to full-time. Assistant Director Derrick Lee took notice of Elida and wanted to promote her to supervisor. He had to ask her several times, Elida explained, as she laughed at the memory of refusing each offer, apprehensive of taking on more than she felt ready for. She did eventually accept the promotion and she didn’t stop there.

Executive Vice President Leroy Adams also noticed Elida’s work and how smoothly her team operated. He promoted her to patient ambassador, which she again, reluctantly, accepted.

“When we would go in [a patient’s room], they would feel like someone cared. That was our intention. For them to feel a warmth in that room,” Elida explained. She and another patient ambassador had so much success increasing their patient satisfaction scores, they were asked to create a program and train other patient ambassadors.

Leroy, seeing the potential in Elida, continued to push her to grow her skills. She started training in administration so she could travel and help with startup accounts. In no time at all, she surpassed all expectations. It was in administrative work that Elida began to truly believe in herself and all that she was capable of. She no longer needed to be reluctant about the next promotion that came her way, or the next, or the next. 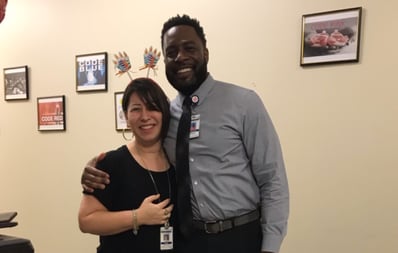 She jokes that her former director, now Vice President Dewayne Kirksey, and Leroy ask her all the time when they can have her back. In fact, there are several people who would probably like to clone Elida.