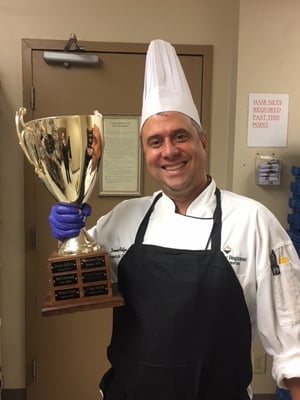 David Ritzo began working with HHS in August 2017 as an executive chef at a facility in Longview, Texas. At the time, the facility served as HHS' culinary training center, which gave David the opportunity to meet a variety of people within the company and learn under the guidance of HHS Vice President of Training and Development Ted Peters. David took this opportunity to get to know HHS' culture and learn the importance of the company’s values and how they impact daily operations.

In February 2019, less than two years after joining the company, David was promoted to culinary director at a facility in Pratt, Kansas. David says that with the support of his team there, they have significantly raised the quality of food and customer service at the facility.

David has more than 20 years of experience as a chef, having served in hotels, casinos, and restaurants, and he even owned his own pizza place for a time. David attended Johnson & Wales University, and while in culinary school, he had the opportunity to apprentice in Italy for six months. In his free time he enjoys traveling, fishing, camping, antiquing, cooking, and trying new restaurants.

“What I enjoy most about working with HHS is having the opportunity to brighten someone’s day by providing them with an amazing meal and great service. I want our patients to feel like they are at a 5-star hotel instead of in a hospital bed! I am very happy with the training, development, and leadership that I have been introduced to at HHS and have met a lot of interesting and great, professional leaders in our profession.”

Rose worked in the food and nutrition department of a hospital in Minneapolis, Minnesota... Read More